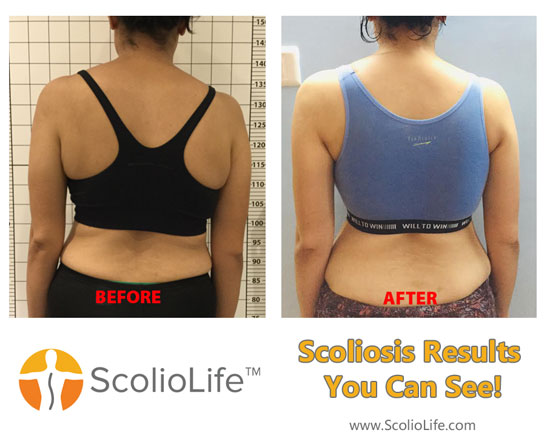 Today we share the amazing results of a 38-year-old patient who was living in Singapore but went back home before COVID struck and was subsequently stuck in India. As international borders closed she continued with her scoliosis treatment at home using the exercises and ScolioAlign brace as directed by Dr Kevin Lau.

We would organize 6 monthly reviews via zoom to follow up on her progress along with updating her program. As she cannot take X-rays due to the worsening COVID situation in India, we instructed her to take a photo of her back so we can compare it to the one she took with us a year ago. We are happy to see that her shoulders are more balanced and her body was more centered even with home treatment. The hump on the right side of her upper back is noticeably reduced and more symmetrical as well.

We congratulate her on the results achieved during a difficult year due to COVID. We hope once the situations get better we will see you in person soon. 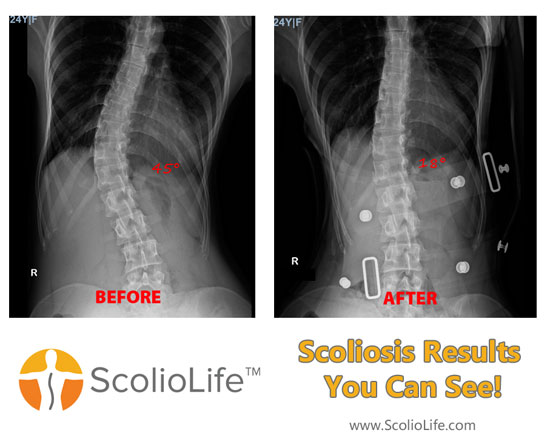 A question we commonly asked is, "can you correct scoliosis even if you are an adult?" The answer is yes! An adult spine is not as flexible as a teenager which means correction tends to be less but still possible. Having realistic goals in your scoliosis treatment is important.

Today we show the before and after results of a 24-year-old lady who chose to do Dr Kevin Lau treatment of once a week therapy along with the ScolioAlign brace. The x-ray showed that her spine even as an adult is still quite flexible with the curve going from 49 degrees to 18 degrees! That's over 50 per cent in-brace correction which is an amazing result.

We look forward to seeing the post-treatment x-ray results to see what her scoliosis has achieved out of the brace. However for now we congratulate her on the positive improvements achieved in only 1 month. 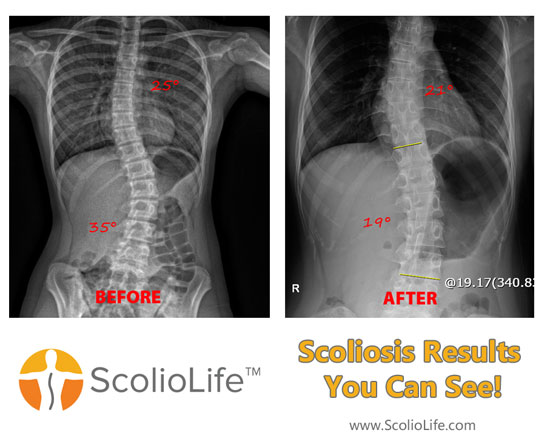 Today results show a 12-year-old girl who initially came in with a moderate curvature of 25 degrees in the upper back and 35 degrees in the lower back. Her auntie recommended the mother to our clinic after her first consultation with the hospital caused her to panic as the specialist told her that surgery might be needed if the curvature went above 40 degrees.

The young girl completed 24 sessions which involved one hour sessions once a week along with home exercises directed by Dr Kevin Lau. A custom ScolioAlign brace which was also designed and fabricated by Dr Lau was also recommended for use at home. The results have been very positive as her latest xrays show both curvatures have reduced, with the upper curve down to 21 degrees and the lower curve down to 19 degrees.

We congratulate her for the hard work she put in as achieving such good results are not easy. 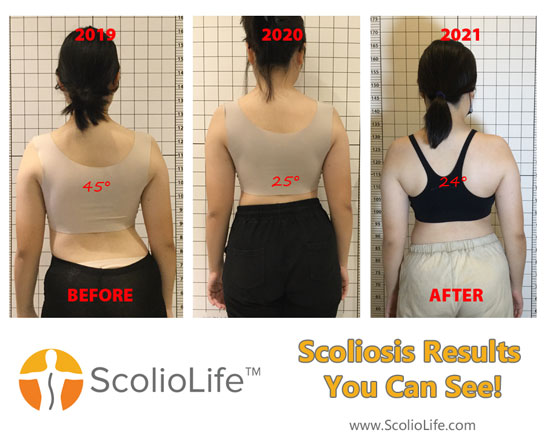 One of the biggest concerns patients have is whether corrections achieved during treatment will stay even after the treatment is finished. Today we share the results of a Singaporean girl who started treatment with Dr Kevin Lau when she was 15 years old. After the initial 6 months of treatment, her scoliosis went from 45 degrees to 25 degrees. Such amazing results was done with weekly 1 hour treatments in the clinic with daily home exercises and wearing the ScolioAlign brace.

In 2021 we did another x-ray review for the patient who is now 17 years old. The latest results show that her improvements had been maintained and her curve has stabilised at 24 degrees. At ScolioLife we pride ourselves on offering the best non-surgical scoliosis treatment available with results that you can see. We thank our patient and her patients for allowing us to share their wonderful results. Today's results are from an 11-year-old girl who has been with us for 6 months. Before coming to our see Dr Kevin Lau her scoliosis was already 18 degrees. Her parents had sent her to a number of specialist in the hospitals whom all told her nothing can be done for her condition. That is when one of our patients recommended Dr Kevin Lau's clinic.

The results of her treatment and home exercises showed her scoliosis reduced to 9 degrees. That means she doesn't have scoliosis as all curves under 10 degrees is not diagnosed as such. The parents are so grateful to have found Dr Kevin Lau's non-surgical scoliosis treatment. This highlights the importance of treating scoliosis when it is mild and not waiting for it to become more severe.

We thank the parents for trusting in our clinic even when other doctors said there was nothing that can be done for her case. Like most patients, it's good to be sceptical as there are a lot of scoliosis treatment claims but at ScolioLife we value delivering results you can see! 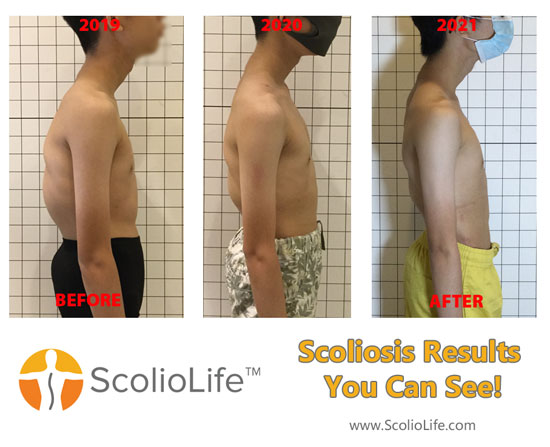 Amazing results for a Singaporean boy who we started treatment with us for his scoliosis at the age of 16. In 2019 his scoliosis was 77 degrees and his parents were told only surgery could be done to improve his scoliosis. After 6 months of therapy with Dr Kevin Lau once a week and using the ScolioAlign 3D brace at home his scoliosis went to 67 degrees in 2020. The latest follow up xray taken from the hospital reviewing his case in 2021 showed his scoliosis has now reduced to 64 degrees.

We congratulate him on the wonderful results on xray and the striking changes we see visually. His posture is improved and posture has never looked better. Over the 3 years, we were able to reduce the postural deformity and help him to regain his confidence. Thank you for letting us share your success and show others that with the right treatment non-surgical scoliosis correction is possible! 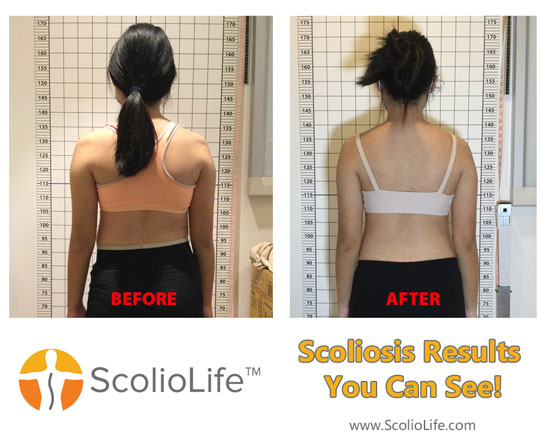 Results after only 3 months of treatment for a 17-year-old Singaporean girl. She came into ScolioLife clinic to see Dr Kevin Lau after years of review with the hospital and no improvement and wanted to see if there was a way to correct her scoliosis. She initially came in with a 29 degree upper curve and 24 degrees lower curve S-shaped scoliosis.

She was recommended the ScolioAlign 3D brace which helped to reshape her back and therapy of 1 times a week supplemented with home exercises. It's amazing that after 3 months her scoliosis had improved to 23 degrees on the upper curve and 18 degrees for the lower curve. Visually, as can be seen in the before and after images, her shoulders and hips are more balanced and scoliosis hump has flattened.

Thank you for letting us share your wonderful results and show everyone you can treat scoliosis without surgery! This 17-year-old girl had lower back scoliosis which caused one side of the hip to protrude and her waist to look uneven. We fitted her with the ScolioAlign 3D brace along with weekly treatments with Dr Kevin Lau over 6 months and the results are great. Visually we see her waist and hip look more balanced with the right hip not protruding as much as before she started. Her body is more centred and posture has improved.

It's amazing what only 6 months can do to create permanent positive changes to a person's spine. If anyone told you only surgery can be done for scoliosis tell them they are wrong. Dr Kevin Lau has specialised in non-surgical scoliosis correction over the last 20 years to give patients the most effective treatment with results you can see! 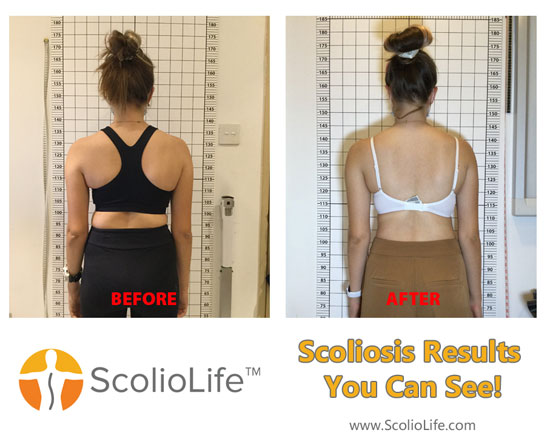 Today we did a patient review for a 16-year-old girl who started treatment in August 2020 and finished December 2020. It's always impressive to see such good visual improvements in such a short amount of time. She did the scoliosis treatment with Dr Kevin Lau along with diligently wearing the ScoliAlign™ 3D brace at home.

When comparing the posture images of August and December we see that the right rib hump has reduced and the shoulders are more balanced. Her body was leaning to the right in August and was more centred in December. As always in our clinic, x-rays were taken along with the posture analysis and it showed her scoliosis reduced from 25 degrees to 16 degrees!

Congratulations on the amazing results. Thanks to her and her mum for allowing us to use her pictures and share her story. 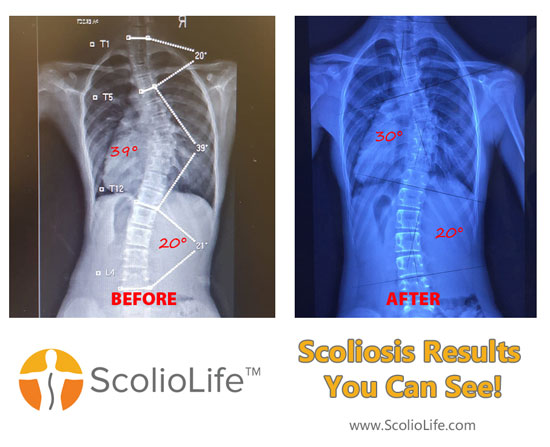 Today's result is from a 13-year-old Singaporean girl who did 3 months scoliosis treatment program with us. On her first consultation she brought her x-rays taken from the hospital which showed a 39-degree scoliosis in the upper spine and 20 degrees in the lower spine. The parents were concerned as the specialist orthopaedic mentioned that if the curve continued to increase, she would then probably need surgery.

Worried about the prospect of surgery then parents went online and found Dr Kevin Lau to seek for a second opinion and a non-surgical treatment. She was recommended a once a week treatment program and was fitted a ScolioAlign 3D Brace to use at home. After the 6 months, her scoliosis reduced to 30 degrees on top and the bottom curve maintained at 20 degrees.

Most importantly she did not have to do surgery. Congratulations on achieving such good results in a short period of time. 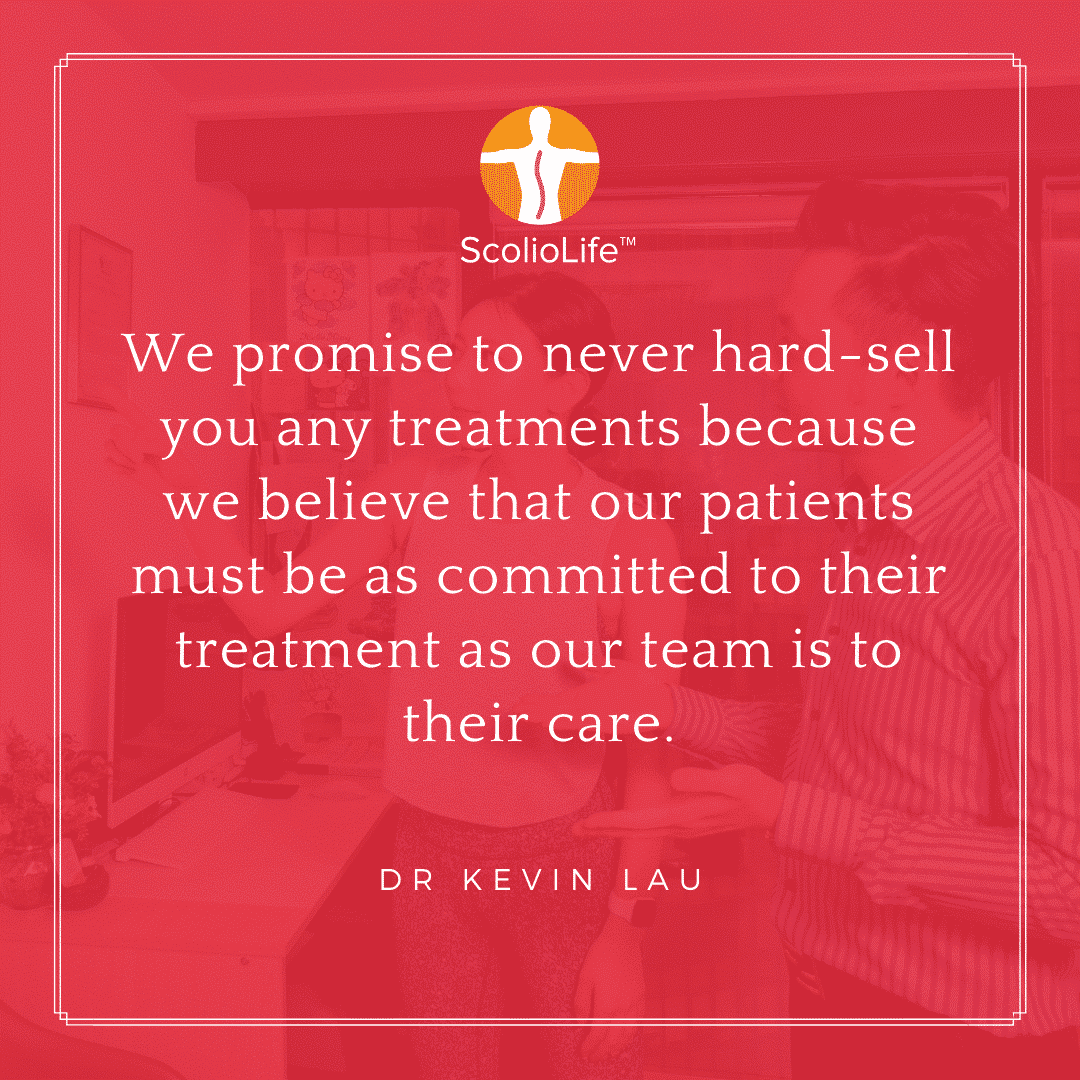 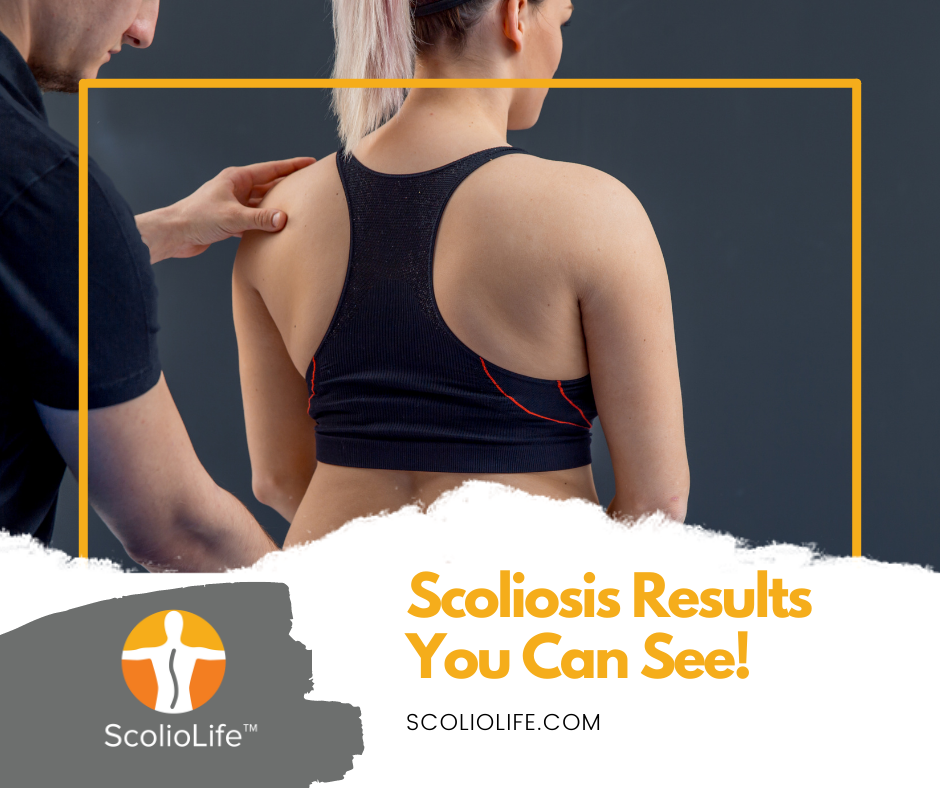